Checkmate is written by Hrishikesh Joshi who is an engineering student living in Pune, Maharashtra. This book is published by Frog Books of Leadstart Publishing Pvt. Ltd. This book received from author is a crime based thriller fiction. 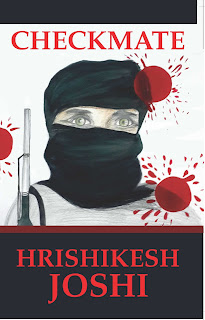 Cover : It is an ordinary cover design, the title and the cover doesn't go well together. The picture of terrorist with gun do gives a hint of story's relation with a terrorist but I was looking for something else on the cover (like a chessboard with players as terrorist on one side and Indian intelligence people on the other or something else more related to the story).

Plot : The story starts with Lashkar e Taiba's (a terrorist organisation) head Muhammad Zia ul Afridi planning something to release his three terrorists from Indian jail. They use Bombay High Court chief justice Ramakrishna Shastry since high court judges are from list of VIP's free from security check at the airport to help them in their plan to send arms to the terrorist in Air India plane. Terrorists hijacked the plane and their partner Taliban hijacked Karachi airport to land that plane. RAW chief Vikram Roy on the other hand came in action to save the hostages from terrorists hand. His search to track the plane revealed something which shocked him to the core. What would happen to the hostages? Would government kneel down to the terrorists' demands? The story took interesting twists and turns to give a high action climax.

Thriller : The setup of the story is nice and the author has cleverly blended the facts with the fiction to make this story believable. Story progresses step by step with short chapters without confusing the readers with unnecessary details. The pace and action of the narrative is maintained throughout making it an interesting read.

Spoiler : The plane hijack remained a subject of many Hindi, Tamil and Telugu films. Although the plan to hijack plane was different in this book the climax looked similar to a Nagarjuna movie. It is difficult to find a connection to any character thus detaching the reader emotionally from the narrative.

Verdict : A fine time read suitable for those looking for a an action packed thriller.