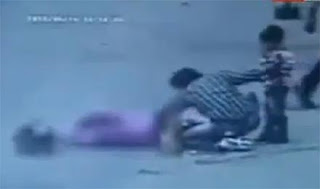 This Sunday a man in Jaipur learnt so many things in less than an hour after he with his family met with an accident in Jaipur road tunnel. First thing he learned was that it's our duty to follow traffic rules and not of traffic police to make us follow them. Two wheelers are not permitted inside that tunnel road where accident took place,moreover no one was wearing any helmet,this resulted in death of his wife and an infant baby when a speeding truck hit them inside the tunnel. But traffic police let him go inside the tunnel without helmet and also speeding truck was not stopped.

Actually accident was not the main reason for these deaths,the victims remain unattended for about forty minutes even when so many vehicles were passing by the site looking at the incident as mere spectators,the footage of incident on news channals make me recall the lines of a song from hindi classic Pyasa(1957) "Jinhe naaz hai hind par wo kahan hain",which means "where are those who are proud of India". How cruel is to see someone loosing her life?How inhuman is to let an infant die? Kanhaiya Lal Raigar was the name of that man whose wife and child was died. He was caught on camera crying for help along with his four year old son after the tragedy but sadly no one come forward.His cries were ignored by the motorist and they passed by without stopping. Someone came after 40 minutes and helped him in calling police and relatives ,police took the victims to the hospital but it was too late.

Is this the same behavior we wants other to do when we are in that position? Even animals don't leave some one wounded,they surrounded it lick its wounds and make all efforts they can do for its recovery.But this shows that we are worse than animals. People in India die everyday of hunger,lack of medical facilities,property disputes,etc. Don't let people die due to lack of humans and humanity.