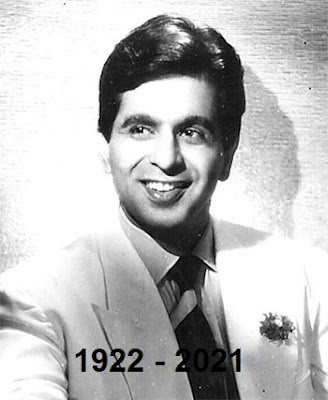 Today (7th July 2021) with demise of Dilip Kumar an important chapter of Indian Cinema has come to an end. Born as Mohammad Yusuf Khan in 1922 he became famous with the name 'Dilip Kumar' and played a pivotal role in shaping the Indian Cinema. I was away from this blog for more than two years but his death forced me to come here and pay respect to this legend by writing a tribute for him.
My father was huge Dilip Kumar fan who introduced me to his movies. Dilip Kumar was source of inspiration for all actors who came after him. From Dharmendra to Amitabh Bachchan to Shah Rukh Khan all are inspired by his acting and movies. He was a natural actor. Although I wasn't born in his era but I can feel how much he has impacted the future generations with his work.
He was referred as 'The Tragedy King' perhaps because of his true portrayal of pain on silver screen which used to make audience feel the pain of his character. He has not given the quantity but quality of cinema to the movie goers. Andaz(1949), Daag (1952), Azaad (1955), Mughal-e-Azam (1960), Gunga Jamuma (1961), Ram Aur Shyaam (1967) or his second inning films like Kranti (1981), Shakti (1982), Mashal (1984), Karma (1986), Saudagaar (1991) , etc all are gems for Indian Cinema. His method acting technique was appreciated by all and followed by coming generations.
He married Saira Banu who is 22 younger than him. They don't have any children yet he remained one woman man throughout his life. His wife Saira Banu seen caring him like a child in his old age probably that's the reason he returned safely to home even after developing age related complications many times but unfortunately he passed away today morning. Many evergreen songs featured on him like, Ude Jab Jab Zulfein Teri, Do Sitaron Ka Zameen Par Hai Milan, Aaja Re Pardesi, Mere Pairon Mein Ghunghru, Aaj Ki Raat Mere Dil Ki Salami, Suhana Safar Aur Ye Mausam Haseen, Saathi Haath Bathana and many more which will keep him in our memories always.
Many actors will come and go in the film industry but there are few who change the course of cinema and Dilip Sahab was one of them. Today's generation might not relate to him like the generation of 90's and before who have heard and seen about him. Alvida Dilip Sahab.
alvida Bollywood Dilip Kumar Hindi Cinema Indian Film Industry inspiration legend Mughal-e-Azam Obituary Ram Aur Shyaam Saira Bano Tragedy King Tribute Yusuf Khan