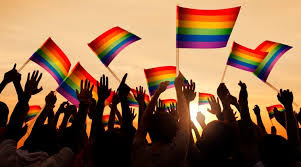 Pyaar Kiya To Darna Kya (Why fear if in love?) that's what exactly Supreme Court meant when a 5 member Chief Justice Dipak Misra lead bench decriminalizes homosexuality by striking down Article 377 of the Indian Penal Court. This is a historical decision for LGBT community who were knocking at courts door again and again for this ruling through Naz Foundation and others. After Right to Privacy become a fundamental right in 2017 it was certain that LGBT community would get this Right To Love.

Section 377 of the Indian Penal Code dating back to 1861, introduced during the British rule of India (modeled on the Buggery Act of 1533) criminalized sexual activities "against the order of nature", including homosexual activities. On 6 September 2018, the Supreme Court ruled unanimously that Section 377 was partially unconstitutional "in so far as it criminalizes consensual sexual conduct between adults of the same sex". Though it is still applicable on non-consensual sexual act between adults and on having unnatural sex with children or animals.

This ruling will lead to decrease in crimes against the community due to prejudice and misunderstandings. Love is love as believed by LGBT community is authenticated by Indian Law. Nobody will judge them with derogatory prejudice in their mind. This ruling has made activists hopeful for other cases like Aadhar linkage and making it mandatory in bank accounts and mobile.
Government of India didn't support the idea of decriminalizing homosexuality and left it to the wisdom of court to decide on the validity of Article 377.

Eminent people like Yogi Ramdev of Patanjali group, Yogi Adityanath Chief Minister of Uttar Pradesh, etc are against the judgement. Rahul Gandhi president of Congress party supported it earlier when Delhi High Court delivered the similar judgement in 2013. Whatever be the politics behind the ruling one thing is clear that LGBT community has got the real freedom today. It also not means that you now observe vulgarity on streets due to this freedom but they can move freely without police fear.