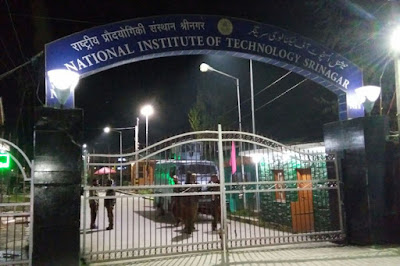 Right now NIT Srinagar has more security personnel than any other educational institution in India. Some reports says that there is one army man for two students. People outside don't really know what is happening or has happened inside because media is not allowed in the campus. Bandwidth is also lowered in campus premises so students wouldn't send their videos outside through social networking sites. Nothing is actually clear but a large part of the country still knew that some Deshbhakhts/Nationalists/Patriots who were chanting Bharat Mata Ki Jay by carrying National Flag were beaten by some Deshdrohis/Anti-national/Traitors and also by J &K police. Thanks to what's app messenger service the country is divided this time into Kashmiris and Non - Kashmiris.

Since media is not allowed in NIT Campus none of us have confirmed reports about what has happened on the night India lost to West Indies and on the night when India defeated Pakistan in T20 World Cup Tournament. Some unconfirmed reports said that some Non-Kashmiri students teased Kashmiri students for Pakistan's defeat which prompted them to celebrate India's defeat in the semi final stage which lead to tussle between both the parties. This outrage increased during students' protest against the administration for not hearing some demands of students. It was then administration called police which attacked students with force, national flag was also taken by police which students were using in demonstration. Political gamblers who are pro in playing with such issues saw this as an opportunity to put oil in the already heated debate of Bharat Mata Ki Jay.

There is a pattern in all university tussles whether it is Hyderabad University, Jawaharlal Nehru University and now National Institute of Technology, Srinagar that a mere protest against university management by the students was curbed with force and the students who retaliate in response to violence were labeled as anti-nationals. It all appeared organised because as soon as the violence irrupted a group of social media rioters were ready to set the course of debate. Some of us who take all what's app and facebook messages as Words of The Book gets trapped in their clutches and help them to promote animosity among our fellow countrymen. None of them questions the role of university management even HRD ministry issue statements without confirmed reports and discussion with the university management.

The students who were beaten by police when narrated the incident to officials of HRD ministry not said that they were beaten for chanting Bharat Mata Ki Jay while there are incidents elsewhere in the country where people attacked for not chanting this phrase. For god's sake never react on social media rumors. It has caused Muzaffarnagar Riot, ignited Dadri incident, made terrorist out of JNU students, brought Bangladeshi migrants in a Dentist's killing and triggered many other big and small incidents. We have to look and understand the politics behind it. In all university tussles 'Left' ideology is the main target. Why? Because two poll bound states out of five namely Kerala and West Bengal have clear fight between Left and others. Assam also has Left's presence so by abusing this ideology BJP can polarize the voters to favor them.

On pretense of NIT Srinagar incident Kashmiri students who are studying in other parts of the country are threatened for dire consequences. 16 Kashmiri students were suspended in Mewar University, Rajasthan for fight over T20 match. All that is happening is not right for Kashmir issue. This will increase the feelings of alienation among them which would turn them towards currently increasing separatist ideology. It is difficult to end this post on a positive note so good bye and just take good care of yourselves.
Analysis Antinational Bharat Mata Ki Jay BJP facebook media nationalists News NIT Srinagar T20 match what's app messenger