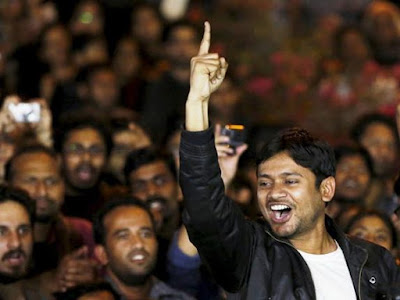 What he said holds ground if we factually examine all the evidence available at present in the public domain. Let’s talk about the anti India sloganeering by group of students lead by JNUSU president Kanhiaya Kumar. First of all FIR submitted by Delhi Police didn't mention any anti India and pro Pakistan slogans in the list of 29 slogans. Secondly five out of seven video tapes referred in FIR are doctored as found by forensic analysis. Finally the role played by Home Minister, HRD Minister, Delhi Police and some of the media channels in portraying that JNU was running by funds from Pakistani terrorist Hafiz Saeed is also under suspicion and shows signs of a planned conspiracy. An organized group was leading the #CloseJNU campaign on roads, on news channels and on social networking sites supported by BJP MP’s Subramaniam Swami, Mahesh Giri , BJP MLA’s like Gyandev Mishra of Rajasthan, O.P. Sharma from Delhi and even Ministers Rajnath Singh and Smriti Irani.

It was all propaganda and if it was not then why some news channels run these doctored videos continuously without examining them? What was the motive in drawing parallel between the soldiers and these students by labeling them anti-national?  ‘Sipahi wahan apni jaan de rahe hain aur ye desh virodhi nare laga rahe hain’ such sentences were spoken in TV debates which not even let JNUSU representative speak to counter attack and if soldiers are dying whose foreign policy lapse is responsible for it. It should also be noted that soldiers don't have exclusive rights on patriotism and nation loving all those who dis their duties honestly and love the country are also patriotic. Why JNU expenditure was shown to provoke people that government is rearing these so called anti national students on public money? Was it all a conspiracy by ruling party BJP its government and its ideologue RSS to malign JNU image which promotes rational thinking, freedom of speech, political awareness, higher education for poor and above all democracy in its true sense.

I want to ask Mr Narender Modi why he didn't share his opinion in Parliament about JNU issue even when this was the hot topic of discussion in current session and referred by Congress Vice President Rahul Gandhi in his speech a day before PM’s speech. How will youth flourish if they were targeted like terrorists? Kanhaiya Kumar also mentioned in his speech that reason behind atrocities of government machinery was to divert Rohith Vemula suicide case and with Prime Minister's silence on this issue too I found no reasons to deny his claims. Kanhaiya also urged PM to listen everyone’s 'Mann Ki Baat' instead sharing his own 'Mann Ki Baat all the time.

Kanhiaya spoke for poor, for farmers, for soldiers, for policemen, for labors, for all oppressed classes of society and their rights. He said that his fight is for 'Azaadi' (freedom) in India and not freedom from India. He called for unity to fight for this freedom from all those things and from all those people who are trying to destroy democracy in India by destroying and suppressing voices of dissent. All those who believed that Kanhaiya Kumar is anti national and traitor must hear him once and think where he was wrong in his demands. Below is the video of his speech.