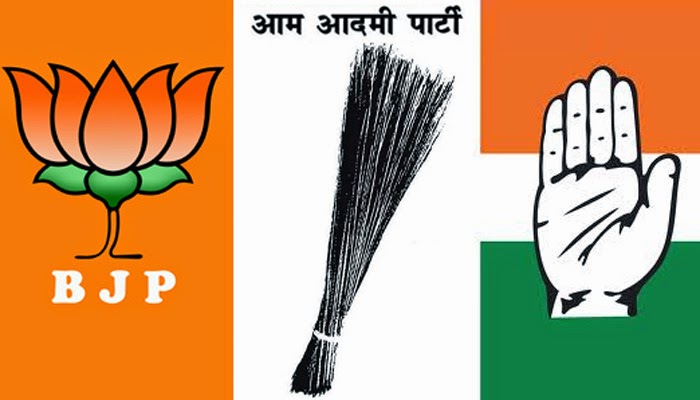 There are numerous battles in the history to conquer Delhi like three Battles of Panipat, Battle of Kurukshetra in Mahabharata ,etcetera fought at the outskirts of Delhi between different kings and rulers but none so big and interesting than the one going on within the limits of Delhi. This is the first battle of Delhi in this winter of 2015 for the 70 constituencies that form this city. Battle because it is fight between personalities and not for the people's issues.

The ruling BJP party in the center have put everything at stake to win this battle. The so called Modi magic which they believe helped them in winning 2014 General Election and then assembly elections in four states is fading here in front of Arvind Kejriwal who is just 2 years old in politics but has changed it dynamics since his entry in it before 2013 Delhi assembly polls. Congress party which is marginalized after 2014 elections is also hoping to regain their lost reputation through these polls but looking at the present scenario it seems very difficult.

Arvind Kejriwal is the reason behind making this battle fierce and grand. He has shaped it in his own terms , played cards which demolished every strategy of his opponents. He didn't want it to be Modi v/s him so he compelled BJP to present a CM candidate in the form of Kiran Bedi, he pressurized her to debate with him which made her nervous and she committed mistakes during her media interviews. She appeared unprepared for her task without any plan and policy for the state she was contesting as CM , her authoritarian behavior irked workers of her own party, walking out from a TV interview and from a reporter's questions forced party to order her not to speak to media again proving beneficial to Arvind Kejriwal. He also displayed a rare trait in politics i.e apology for leaving government in 49 days last time. A country where politicians and political parties never felt sorry for their wrong doings his apology made him closer to the people.

This is also a first that about 120 MP of ruling party including many cabinet ministers were campaigning for 70 seats assembly elections and that too for a state which is not even a complete state. This is also strange that BJP chief Amit Shah has not spoken a word in support of his CM candidate Kiran Bedi. Every weapon available has been tested from newspaper adds to social media campaign, from twitter trends to letter to each home but in all these hullabaloo core issues have lost.

The nation is watching Delhi. The world is watching Delhi. Name, reputations, future, expansions, policies, leadership,marketing techniques all are at stake in this elections. This battle of personalities,this battle of ideologies, this battle of ego will change the course of politics of this nation. Will the unconquerable Modi taste a defeat? What will be the future of Arvind Kejriwal after this election? What will Congress get from this battle? There are many questions which will be answered on 10th Feb 2015 the counting day.

In the end I would like to say that whatever may be your choice do vote and exercise your right on 7th February 2015. In this historical battle of polls lets create history by making new record in voting.
2015 Assembly Polls aam aadmi party Amit Shah Arvind Kejrivaal Battle of Panipat BJP congress Delhi elections Kiran Bedi Kurukshetra Mahabharata MP PM