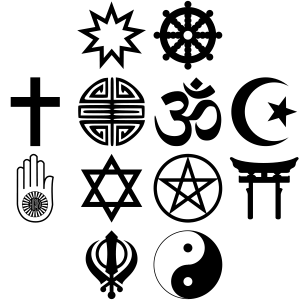 "World Temple would be a place of worship for all." As teacher finished the lesson school bell rang and all students started leaving the class except Mridul. The idea of world temple where every religion would be equally worshiped struck him so strongly that he wanted to know more about this theory. He ran towards his teacher and inquired the details.

" See Mridul this chapter put forward this idea in sync with 'all world is a home concept'. Holy books of all religions would be kept there,there would be walls inscribed with stories and teachings of Islam,Hinduism,Christianity,Sikhism,Judaism,Buddhism,etc. All caste,culture,creed,color would be allowed in this temple. All world would be equal there as humans and not as Hindus or Muslims or Christian or anybody else." " Sir who will build this temple." His teacher's answer that he didn't know made Mridul more curious. He went home and told her mother about what he learnt in the school and asked the same question from her. She averted the topic and asked him to be ready for lunch.

That day he didn't go outside to play with friends. Everywhere in news he saw hatred at its peak,people making demeaning remarks for other religion or region. World temple would be full of love for everyone. He asked this question about world temple from many around him in the building where he lived but all ignored him. They didn't knew the answer of his question. They never thought about that, how its possible that each religion resided with harmony with other religion under same roof.

In the evening when his father returned from office he explained his lesson and asked the same question to him. His father smiled patted his back and said," You will build this temple my son." " Me Dad!" He looked surprised." Yes my son,world temple is in you. It's in everyone who respect all religions equally.Those who keep God in their heart and not in any religious place. It will be a place for god loving people rather than god fearing people." His father's answer satisfied him. He gave a promise to his father to construct a strong world temple and to spread its roots to others as well.