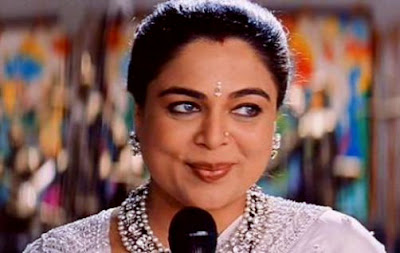 Reema Lagoo along with Farida Jalaal is among the most favorite mother of Bollywood in 90's and early 2000's. Reema Lagoo breathed her last today on 18th May 2017 after a cardiac arrest. She was only 59 and free from any major illness at the time of her death which makes this news more shocking to her fans. She was equally famous in films,television and Marathi theater. I have heard that she remained associated with Marathi film industry, theater also during her working days and was an appreciated name in that industry.

I remembered her from the days of Tu Tu Main Main where she played Mother-in-law (saas) of Supriya Pilgaonkar and Shrimaan Shrimati where she was a middle class housewife. In both of these comic roles she was superb in her timing and dialogue delivery. As a character actor in Bollywood movies she played mother to almost all superstars of today and has worked with many top directors,actors and productions. Her role as Salman Khan's mother in Maine Pyaar Liya, Hum Saath Saath Hain, Judwaa as Madhuri Dikshit's mother in Hum Aapke Hain Kaun, Juhi Chawala's mother in Qayamat Se Qayamat Tak, Shah Rukh Khan's mother in Kal Ho Na Ho, Urmila Matondkar's mother in Rangeela, Saif Ali Khan & Akshay Kumar's mother in Yeh Dillagi , Sanjay Dutt's mother in Vaastav, etc are much appreciated role of her. My favorite among these is her character of Sanjay Dutt's mother in Vaastav where she killed her own son to get him rid of his sins.

People come and go in this film industry as a natural law but few left their impressions even without being a lead actor and she was that kind of personality in Hindi movies. With charm on her face and her simplicity #ReemaLagoo used to capture the audience attention even being a character actor. People can relate her with the mothers of that time. She has created a void in both television and film industry which will always remind us of her absence but as they say 'Show Must Go On.' Good bye for now. Rest In Peace Reema Lagoo.